Non-commodity charges are complex. Even more so now, thanks to major changes being introduced by Ofgem as part of its Targeted Charging Review (TCR). The TCR has initiated the biggest-ever shake-up of transmission and distribution charges, with new methodology for the residual element (or lion's share) of both Transmission Network Use of System (TNUoS) and Distribution Use of System (DUoS) charges scheduled to impact bills from next April.

But due to the level of complexity for consumers – and a desire to align changes to a second review looking at the forward-looking element of these charges – Ofgem is proposing to delay implementing TNUoS changes by 12 months, to April 2023. (DUoS changes remain on track for April 2022.) This move is likely to be welcomed by many customers.

Many large consumers to pay more

Exactly how the changes will impact your business will depend on what your current TNUoS charges are, if you pay these on a fixed or pass-through basis, and whether you Triad1 manage or not.

The increasing numbers of businesses who do Triad manage is a major driver for the Ofgem-instigated changes.

This is because larger energy users who are able to be flexible around consumption – for example by switching to on-site generation or decreasing consumption during peak times (or Triads) – are able to reduce their contribution.

But this then increases the share others pay. And Ofgem wants to remove this 'unfair' advantage and make charging more equitable for all.

That's why the changes involve switching the residual element from a "time-of-use" charge to a fixed charge.

For DUoS, charges are currently based on consumption during Red, Amber and Green periods, plus some element of fixed charges. But from April 2022, this will shift to a lower time-of-use plus higher fixed charge model, across four bands.

A consultation on the TNUoS delay closes on 5 July, with a final decision due by the end of the summer. But it looks highly likely that the status quo will continue for another year.

Which band will you be in?

Banding will be determined by site, and is allocated according to net annual consumption for Non-Half-Hourly (NHH) settled users, and agreed capacity (kVA) for Half-Hourly (HH) settled users. Allocation is based on an average 24 months of consumption prior to calculation – and was set by your local Distribution Network Operator back in November 2020. 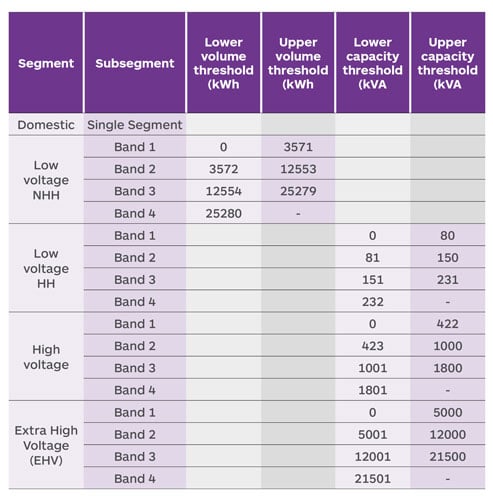 Sites will remain in the same band until April 2026. You can only change prior to this if your site consumption or capacity change by at least 50%. Otherwise the next allocation of bands will be calculated in April 2024.

For more information on how Ofgem's TCR changes will impact your business, please contact your Client Lead.

1 Triad's are the three half hours of peak national demand between 1 November and the end of February. They are calculated retrospectively by National Grid, but are forecast by many suppliers so that customers who want to reduce consumption during suspected Triads – i.e. "Triad manage" – can do so.

Niall Coyle is a Costing & Risk Analyst, where he specialises in industry third-party charges. This includes forecasting network and policy charges for customer pricing, as well as ensuring stakeholders and customers are aware of any risks and opportunities presented through industry developments.

New challenges and opportunities in the changing energy landscape

How customer service has changed during the pandemic

Energy Insight – catch up on the latest news and developments

To discuss a quote or a renewal for one of your clients please call:

npower Business Solutions does not provide energy for homes. We do not hold any accounts, information or services for home energy. If you are a customer who was previously with npower for your energy at home, you have been moved to E.ON Next, who offer specialist services, designed to support you. Please visit the E.ON Next site for support, and all the information you need about home energy, from your existing account to new quotes.

npower Business Solutions does not provide energy for smaller businesses and we are unable to provide quotes. We do not hold any small business account information or services. If you are a small business who was previously with npower, you have been moved to E.ON Next, who offer specialist services, designed to support you. Please visit the E.ON Next site for support, and all the information you need about small business energy, from your existing account to new quotes.