Unsurprisingly, there’s been lots of media coverage of the wholesale energy markets, with consumers keen to monitor rising costs and underlying drivers.

But perhaps surprisingly, there’s been far less focus on changes to non-commodity elements of electricity bills, despite these accounting for more than half of overall invoiced costs.

While high wholesale prices are good news for subsidies linked to market rates, such as the Contracts for Difference (CfD) levy – they have not had such a positive impact on other charges. Notably the Renewables Obligation (RO) and National Grid’s Balancing Services Use of System (BSUoS) charge.

So, let’s start with RO.

As you may have read in previous blogs, the high number of failing suppliers – 25 since August – has created a situation where many have not paid over the RO charges they’ve collected from customers for the 2020-21 compliance period (called ‘CP19’). This has created a shortfall that’s run into many millions.

But until figures were released earlier this week, the industry wasn’t aware of exactly how high that amount was. We now know it’s a whopping £218 million.

Thanks to a process of ‘mutualisation’, this shortfall will now be shared out among the still-solvent suppliers.

To provide some context, this averages out at around £0.8/MWh for the 2020-21 period. Depending on your contract type, this may result in some additional charges being passed through.

In addition, suppliers have already gone bust without paying £87 million of RO for the current compliance period (Apr 21–Mar 22). This is in addition to Bulb’s £145 million RO bill, which we expect to get paid – but which is far from certain.

As a direct result of our lobbying the Department of Business, Energy & Industrial Strategy (BEIS), a consultation is now open to look at forcing suppliers to pay their RO bill quarterly rather than every year.

This will reduce the amount of unpaid RO which, along with a huge reduction in the number of suppliers now at risk, should prevent a repeat of this in future.

No business wants additional charges they didn’t budget for. But compared to National Grid’s fees for balancing the grid, RO is sadly small fry.

November has seen the highest-ever month of balancing market costs, with an average rate of over £12/MWh. 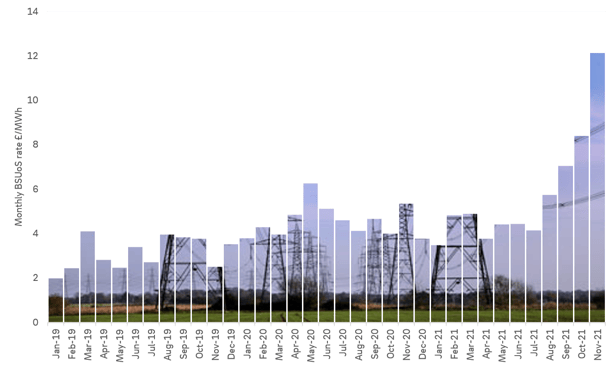 To say this is unchartered territory is an understatement. But why is National Grid having to pay such colossal sums to balance our electricity system?

Once again, high wholesale prices are the main driver.

Generators can either produce energy to sell to the wholesale market or generate to participate in balancing services – but not both. So, the fee National Grid has to pay for balancing services has to be high enough to incentivise participation. In the current market, this is eye-wateringly high.

There are other drivers too – and these are due in the main to our increasing reliance on wind generation.

Firstly, National Grid has an ongoing number of transmission asset outages – pylons, cables, wires etc. Normally, the majority of repairs and maintenance, as well as connecting new wind farms to the grid, should be completed by the winter season. But not this year – and this creates problems when it’s windy, as there is simply not the capacity currently to transmit all the wind generation around the grid – and in particular from Scotland to England.

Likewise, reserve generators have to be paid to generate when it’s not windy. And at today’s prices, this isn’t cheap. So, the upshot is BSUoS fees are rocketing…

BSUoS is determined half hour by half hour and only set retrospectively month by month. So as a supplier, we are not able to provide customers with any future certainty over these costs.

This is a problem we’ve been flagging for almost a decade now. Finally, after a long period of lobbying, a modification has been proposed to have BSUoS costs recovered as a single fixed charge – set for a three month rolling period with 12 months’ notice given of any change in charge rates.

We are hoping Ofgem will make a decision on this by April 2022, with new charging methodology potentially introduced by April 2023. So, watch this space.

For now, we appreciate these volatile costs for BSUoS and RO – especially on top of volatile wholesale commodity prices – really are not good news for consumers.

For more information and support, please contact your Client Lead or Account Manager (existing customers). Or drop our team an email via info@npowerbusinesssolutions.com.

Stephen has worked in the E.ON/npower business for over twenty years advising the businesses’ trading, generation and retail divisions as an industry expert. For the last nine years he has been supporting domestic, small and large business customers on various elements of their bill and for the last couple of years Stephen has been leading the ‘Costing and Risk’ team forecasting over 60% of the final bill for all of E.ON and npower. Stephen ensures his team and the wider business are particularly well positioned to meet the needs of business customers.

How young people, business and science can together achieve net zero

Scope 3: Waking up to the risk of ‘no action’

Why understanding your Scope 1, 2 and 3 emissions is good for business

COP26 - Did it deliver for businesses?

From Solar PV to CHP: Making the Case for On-site Generation.

Energy changes: what to expect in 2022

To discuss a quote or a renewal for one of your clients please call:

npower Business Solutions does not provide energy for homes. We do not hold any accounts, information or services for home energy. If you are a customer who was previously with npower for your energy at home, you have been moved to E.ON Next, who offer specialist services, designed to support you. Please visit the E.ON Next site for support, and all the information you need about home energy, from your existing account to new quotes.

npower Business Solutions does not provide energy for smaller businesses and we are unable to provide quotes. We do not hold any small business account information or services. If you are a small business who was previously with npower, you have been moved to E.ON Next, who offer specialist services, designed to support you. Please visit the E.ON Next site for support, and all the information you need about small business energy, from your existing account to new quotes.

From straightforward contracts to sophisticated energy solutions to suit your business, we have the experience, expertise and stability to support your goals﻿.
Continue to website